"Postcard to Miss Dashper the day before War broke out" 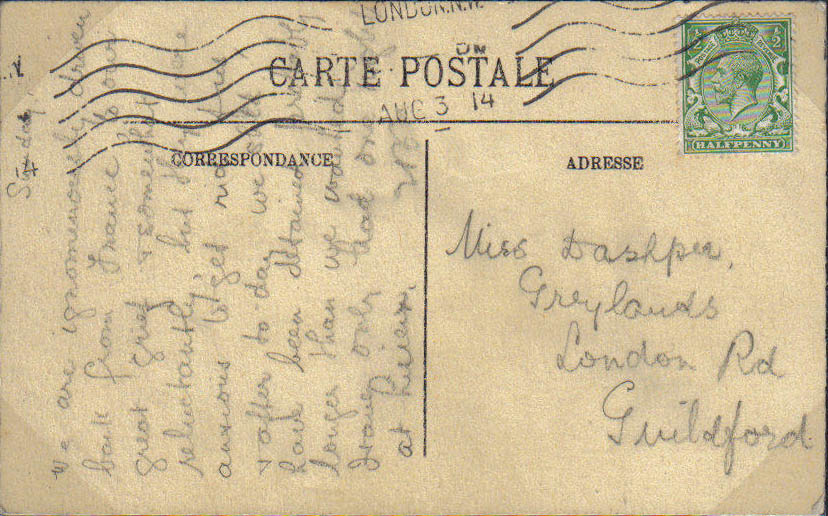 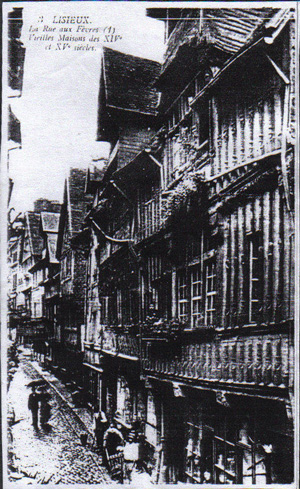 The postcard is in pencil to Miss Dashper , and was written THE DAY BEFORE WAR BROKE OUT . . . 1914

The message to Miss Dashper reads;
"We are ignominiously driven back from France to our great grief and somewhat reluctantly but they were anxious to get rid of us and after to-day we should have been detained probably longer than we would have wanted. Have only had one night at Lisieux."

There is an initial at the conclusion of the text, but it is very hard to decipher.

It could be signed possibly IB or VB, or even 213?

The card to Miss Dashper probably reached its Guildford destination hours before War was declared.
Which leads us to ask: Who was Miss Dashper, who sent the card, is the letter in some kind of code, and what had they been doing in France just before war broke out????

"I had a chat with Judith last night and we both agree that the lady is of course Lillian Mary Dashper daughter of Charles Grey Dashper and Mary Ann born 1873.  As to the sender of the card from France we both agree and think this is probably a chap, in fact Lillian's chap.  In those days privacy and utter decency was as important as life itself, hence the card being signed with initials only. which was certainly not uncommon for those days.

I wonder what happened to this person over in France, and I wonder if they made it back home to England. All of Europe prior to War being declared,  was in utter chaos for a good while.  Lillian of course never married . . .  maybe there is an answer there. "

Lillian M Dashper has recently cropped up in another Dashper Xfile #25.
Two very interesting Dashper artefacts within a relatively recent space of time, leads us to wonder if some of her personal effects may have been put onto the auction market recently, following her death in 1963.  Any other Lillian M Dashper memorabilia surfacing over the next few years will perhaps confirm this.