I found your post on the Dashper genforum. I am not related to the Dashpers in any way. However, I am researching the family of Charles Grey Dashper for a friend. This friend collects antique dolls and recently purchased a beautiful doll that had information written on a piece of paper that was pinned to the dress.

I believe this Lillian to be the daughter of Charles Grey Dashper. The doll dates to much earlier than Lillian who was born in 1873, and may have first belonged to either her mother or grandmother. Would you be willing to share any information you might have about this family? My friend is very interested in learning the history of the family who once owned this wonderful doll.

I have recently acquired the early English wax over papier mache (Dashper) doll.  The doll is in very good condition for a doll of its kind and of its age.  This type of doll usually dates circa the early 1800s.  It appears to have been very well cared for and is in largely original condition. The only alteration I have made to the doll is to give it some hair, as it's original hair had long ago pulled out of its wig base. I purchased it from an English doll dealer who probably bought it at auction in England.  Upon examining the doll more closely, I discovered a cloth tag sewn up under its dress, attached to its undergarments.  This tag appears to read:

Any additional family history would be wonderful to add to this doll's provenance.
Xfiles #25 UPDATE (posted by Kathy Turner  26/03/2005 from Virginia, USA).

It would be wonderful to have any additional family history that might be tied to this very old doll.  I appreciate the research that you are doing.  Here is a very brief  and rough description of the most common kinds of dolls available in the 1800s, with the assumption that you are unfamiliar with the history of dolls.

During the first quarter of the 19th century there were home made dolls of cloth and wood.  Commercially made dolls were made from wood, papier mache, wax over papier mache.

In the 2nd quarter of the 19th century, circa 1840s, the first glazed china dolls were made.  These continued to be produced up until the early 1900s though the quality had declined by that time.

In the 3rd quarter of the 19th century bisque dolls and became popular.  The creme de la creme were the expensive French fashion dolls.  Bisque dolls are still being made in the present day. English solid poured wax dolls were also produced during this time.

The doll that I have dates from the first quarter of the 19th century.   It is a wax over papier mache doll.  It has a shoulder head composed of a papier mache type material that was painted and coated in wax.  Over time the wax has developed a crazing of fine lines that fill with dust, thus showing as dark lines.  This is typical of this type of doll. It has inset blue glass eyes.  The body is cloth stuffed with sawdust.  The arms are pink kid leather.  The doll has a cloth cap affixed to the head, covered in thick thread stitching through which the original hair was woven.  The doll is wearing period clothing consisting of pantaloons, under shift, petticoat, and dress all in aged white, but also red leather shoes.  The style of dress is that of a girl's from no later than the 1820s I would guess. The doll is about 16.5 inches tall.  I took photos of her as soon as I got her, which I will attach to this email.  Since then I have given her some hair.  I am also including a photo of the cloth tag with the names, date and locations written on it, that is stitched to the doll's underclothing. 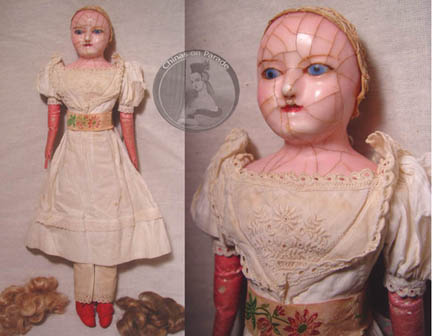 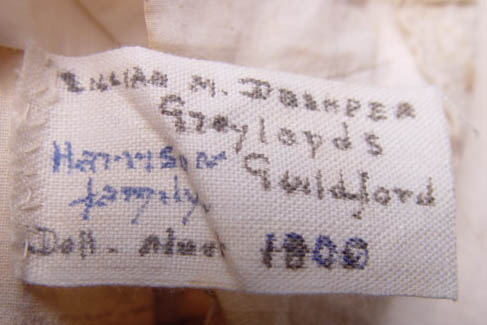 
As a further aside, this particular type of wax over papier mache doll, with their round moon shaped faces, are sometimes referred to as "Mad Alice" dolls, after Alice Smith who lived in Lunds Court (linking Swinegate and Low Petergate) and formerly known as Mad Alice Lane.  In 1825 she was hanged at York Castle for the perceived crime of insanity.  The doll has born the ravages of the years remarkably well for a wax doll. 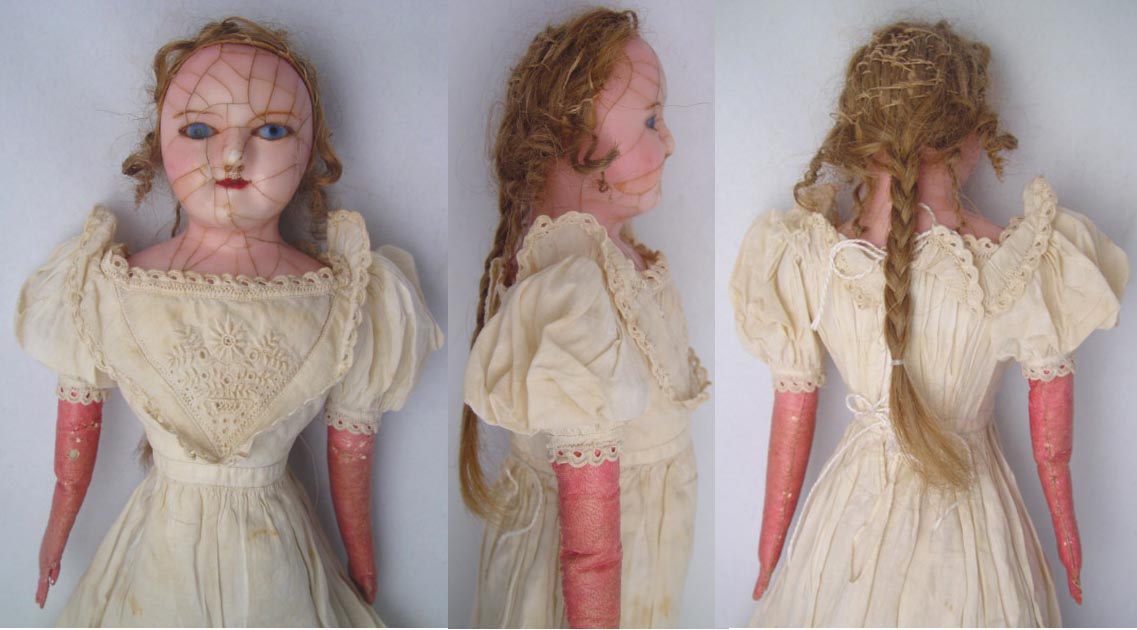 "I have looked into the doll for you a bit at work, after we talked about it at the reunion.

We believe that this is an English dipped wax doll made between 1800 and 1860. Dipped wax dolls were made by coating an already painted papier-mache
head in a layer of molten wax, which was a much less expensive alternative to the poured wax method (which are extremely rare because very few were made and were only available to the very rich). The dipped wax dolls are more simply modelled and may be of inferior quality but because of their affordability they are popular with collectors today. The method of dipping a papier-mache head into liquid wax began very early in the 19th Century in
London it wasn't taken up in Europe until the 1860's by which time English manufacturers had moved on to other methods.


The crazing seen on the face is caused when the papier-mache expands more quickly than the wax coating and will detract from the value. Do not re-dip them however.  At 25" high the estimate value would be about $250 - 400 (dollars). In good condition and elaborately dressed in original clothes they can make $1000 - 1500.


Most dolls have lost their manufacturers labels so it is very difficult these days to attribute them to a manufacturer. A local auctioneers should be able to give them a sale estimate. I hope this is useful."