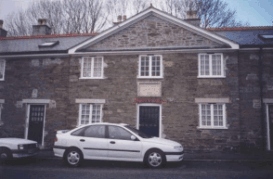 "Have received photocopied maps of portions of Tavistock showing Ford Street (where most of the Tavistock Dashpers lived in 1850's) 1842 and 1883.  The 1883 map shows a blowup of Ford Street in the Charity House area which is listed as Maynard's Charity House not Ford St. Charity House, at that point in time.

Behind the Charity house (Agnes Dashper's address 11/11/1841 was Union Workhouse, Tavistock) more exactly,  behind houses next to the Charity House, is a building titled Old Workhouse. We now have to consider that the Old Workhouse and Ford St. or Maynard's  Charity House are 2 separate entities.  I looked at the photos I took and didn't pick out the old building where the Old Workhouse was.  But unless my memory fails me, I think I saw an old building back in off Ford St.  The maps are 12'' by 24" nearly. I don't think I can scan them in any realistic way.   The chap sent  what must be a more modern map of the area with a few of the Ford street numbers slotted in. He said that was all he could find in the records.  It is truly laughable.  One side of the street seems normal with numbers going in sequence, (but starting at 11??, 12, 13, 14 etc.) heading toward the town center. Of course that is not the usual custom in most urban centers,  unless the town center moved over the years.

The other side of street seems to begin with 9 facing 18 on the other side of the street, with numbers declining up to in front of the Ford St. Charity House and then inexplicably rising again as they head down to the modern downtown where the Church and  Abbey remains are located.

The only explanation I can give for the confusion, is they numbered the existing  houses and when  a block of new houses were built , they just assigned them numbers.  We may need the services of a local historian to find where the Dashper's actually lived. I will try to find out if there is a Tavistock historical society to get some answers to the above."