The Mystery of the Dashper Residence at Lanes End, near Peter Tavy 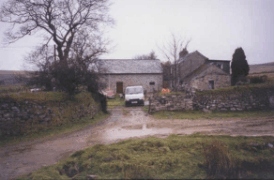 ("On my recent visit 1999, I located the very remote Lane End Farm in the parish of Peter Tavy, where William Pellow Dashper and family lived c1860's until c1900." - Graeme Wallis)

[ Behind and to the left of the farmhouse stretches Dartmoors.  The day we were there a large red flag was up indicating that the army was doing their shooting practice, so we did not venture too far.  Also note the wet conditions of that day.  We did not go into the house, but it appeared to have significant renovations over time. The section nearest the stone fence seemed to be the older part. The large oak to the left I think is mentioned in my pixy book (below) as being significant to the early people.]

Exerpt from Folklore and Legends of Dartmoor  by William Crossing  - re Lanes End  page 76 : Chapter on Pixies:

"The farm at Lanes End , near the lower part of Tavy Cleave, at one time received much attention from the pixies, but I cannot discover that they have been seen in the locality during recent years."

Further in Folklore and Legends of Dartmoor page 92:

"An ancient manor house on the border of the moor is haunted by a spirit known as the White Lady, and a solitary farmhouse at Lanes End, in the vicinity of Tavy Cleave, was at one time visted by the shade of its former occupier."

"Peter Tavy Combe.. here were to be seen when the moonlight silvered the stream that runs through the combe ...numerous troops of fairies disporting themselves in a variety of ways.  The combe was a fitting place for their gambols."

[Leading me to suspect that the people of Devon drank too much!]