One of my grand uncles, Earnest Edwin Dashper, left England, and went to live in South Africa in 1896.  We have very little information about him, apart from a wedding notice, and an obituary on an old newspaper clipping saved by his brother, my grandfather Frederick Charles Dashper. He was born in 1872, and died on 12th December 1935 in Port Elizabeth, South Africa. Earnest was married to Margaret (Maggie) McNair  on 4th January, 1904, and was employed in the Railways and as an Entertainer.

"Mr. Dashper was in his day a brilliant soccer player,and prior to his arrival in this country, had represented his country (England), but he was perhaps best known in this city through his wonderful entertaining abilities. He possessed a fine light baritone voice and was perhaps the finest allround amateur comedian known in Port Elizabeth, and he gave his services freely and willingly in the interests of charity during his 40 years residence. No charity organisation and no section or creed ever asked for his help in vain.

He was a member of the original P.E. Operatic Society, and no doubt many will remember his "Gobo" in Faleka and many other parts entrusted to him, all of which he portrayed with great ability. He was one of the old school of comic singers, and of the highest refined type. His performances in the minstrel variety shows, when he and Mr. G. Shegog were known as the Victoria Minstrels (Mr. Dashper as "Tambo") will be well remembered, for every performance resulted in packed houses, and in handsome donations to charity.

He was a bright, jovial personality, and his cheery encouragement to all his friends will be missed."

We are wondering what became of him, whether he had any children of his own, and whether there are any Dashper's still in South Africa.

Earnest Dashper married Margaret McNair, sister of James McNair from Renfrewshire, Scotland. James McNair's second wife, Olive, died in 1919 shortly after the birth of her third child. Earnest and Margaret had no children of their own, so they looked after and brought up James's daughter Janet McNair, (my mother) at their home in Callington Street, Port Elizabeth.

Janet had a very happy up-bringing with Earnest and Margaret. She learned the piano and dance, and she was very fond of Earnest, who took her to the cinema and to the park.

Any information that you have regarding the McNairs, no matter how trivial, will be greatly appreciated. Grandad James McNair was an engine driver and what with the family connection, would have known Earnest very well.  Meanwhile my neice in South Africa is continuing her search for the Dashper resting places in Port Elizabeth. I have asked her to photograph the memorials when she finds them.

I have a photo of the house in Callington Street which my husband took on our last visit to SA, which has changed little from when my mother lived there, except that the upstairs balcony which was once enclosed by latticed wood is now glazed in.

I also have a photo of a group of people taken at Christmas time, but the quality isn't too good and it is damaged. I can only identify my mother and Tommy Evans on it. Mom's face is partly obscured by the man at the front with the pointed hat, and Tommy Evans is next to her. He was the member of a dance band. It must have been taken about 1934, because she married my father in 1936. 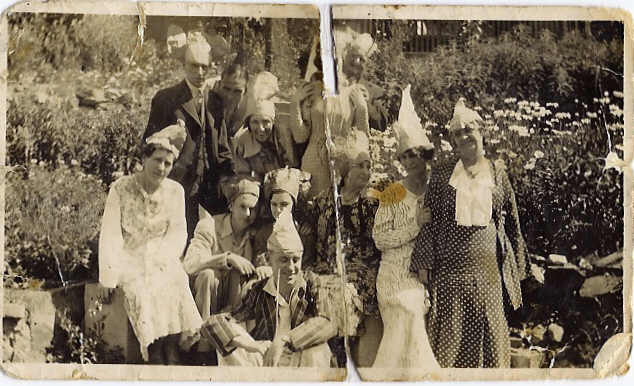 Margaret (Maggie) Dashper appears to be second from the right. Perhaps Earnest Edwin Dashper is the man at the top left?  Or is that a man in a dress beside Maggie?

On a recent search, I discovered a record of my grand uncle Earnest Edwin's voyage to South Africa. The other Dashper on that voyage has the initials F.G Dashper which must be his older brother Francis Gilbert Dashper.  Both are listed as 'Prospectors', which may allude to the gold/diamond rush, given there are other listed 'Miners' on board?

Their voyage began on 21st January 1897, on the Norham Castle. They disembarked at Algoa Bay South Africa. There were 50 adult  passengers on board, and the ship was at sea for 65 days. 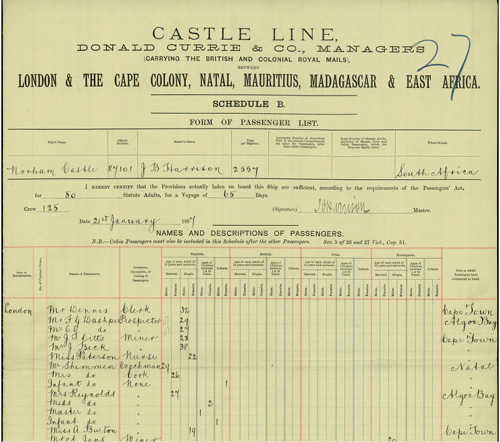