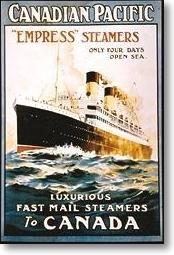 On the Empress Passenger Liner, two Dashpers turn up on the passenger list as travelling from Liverpool to Quebec, Canada.

Mr F Dashper and Mrs Dashper took this journey. I suspect he  may be one of the Frederick Dashpers, and possibly even my grandfather, however at this stage there is no other evidence as to their identity. The full passenger list is viewable on  http://www.angelfire.com/hi/tigy/empress.html . I would dearly love to know more, if anyone has further information. [M Dashper] 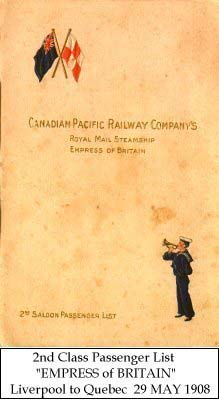 "The "Empress of England" belonged to the Candian Pacfic shipping system and served the route between Liverpool and Quebec City. She and her sister, the "Empress of Ireland," were two of largest liners of their time. The "Empress of Ireland," however, - - after a collision with the Norwegian steamer "Storstad" in the St. Lawrence River on May 29, 1914, sank almost immediately, claiming 1,024 lives (the White Star liner "Titanic" had sunk two years earlier with the loss of over 1,500 people, and those two sinkings represented the two worst sea disasters to date).

Canadian Pacific had three liners of this name. The Empress of England built in 1906 had a black hull and two funnels.  Details are in the TSL archives (http://www.oulton.org/TheShipsList)  although you may have to look at several posts before you find the 1909 ship (search on "Empress" and "Britain").

I think I may have solved the mystery of the Frederick and Lily Dashper with the help of the information I do have from Winnipeg and Derek's
"Dashpora".

"If you look (BMD records) at the 4th quarter of 1908 there is a death for Beatrice Lily Dashper in Wisbech.  Perhaps this is the Lily that appears on the ships list for 1908?.  They returned to England from Canada where Lily died later that year.  Sapper Frederick Dashper was killed in 1915 in the WW1 [http://www.dashper.net.nz/warrecordsapperfrederick.htm]

5. If you  work even further back I think we are talking about the Torquay Dashper family-John Dashper and Mary Sweet.

6. There is a Beatrice Lilly Dashper died in Wisbech age 21 in the 4th quarter of 1908.  If a Dashper, she would appear on the "Dashpora" as a
birth about 1887 but there is none so I believe this is the Lilly that appears on the Empress of Britain as married to Frederick. The confusing thing is the marriage for Benjamin William Dashper in 1908 in Wisbech.   That would mean he returned to England that year as well yet settled in Winnipeg sometime before WW1.  His son Frederick Benjamin  Dashper was the WW2 flying ace who  was born in Winnipeg about 1920.

Anyway that is my theory."   (Linda Etty)

Regarding the three who made the trip to Quebec from Liverpool in 1908, I think that the names may be twisted a little.  My father, Benjamin William came out to Canada with his first wife, but I never did know her first name.  Dad was a carpenter, not a brick layer.  I was unaware that Fred came with him but that is possible.  Very shortly afterwards Dad had to take his wife back to England as she was very ill with tuberculosis, and died either on the voyage or shortly after. I'm  sure that she would be the one buried in Wisbech.
Dad returned to Canada a short while after, worked as a carpenter for a time, then worked with the Winnipeg Street Railway Company, and finally with the Canadian National Railway Express until he retired.  I think that he married my mother, Annie Graves in 1916, and I was born in 1920.
Dad didn't talk much of his early days in Canada so I don't have much information about that time.  He talked of building his own houses for sale, and working on the new Timothy Eaton department store building, but he was too much of a perfectionist to stay in the carpentry trade.