"Entry: 15 Oct. 1864  Mr. Dashper , Station Master, another railway accident. The location had a * beside it which could be a ditto for 117 High St. (possibly where it was recorded) or something else. The town was Godalming  ( I looked it up, it is in Surrey, today anyway, north and a little east of Portsmouth and just south of Guildford). Not sure how you access the information regarding these newspaper items."


The man who fell in front of a train at Monument Station yesterday, and was killed,  was identified as C.F. Dashper, aged about 45, an employee of the Union Castle Steamship Company, Limited,  Fenchurch St, E.C.

This unfortunate C.F. Dashper would be Charles Frederick Dashper.  Charles  (B: 1890, D: 1936) was married to Elsie Page (D: 1982).  His parents were William Wiltshire Dashper and Elizabeth Alderton, and he had two brothers William Alderton Dashper and Edward Geoffery Dashper, plus a daughter Sylvia Dashper. 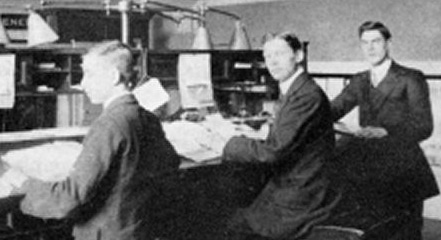 The image shows the interior of the Union-Castle Southhampton office in Canute Rd., and is of the general department on the upper floor (the inner sanctum - the manager's room - led off this). The boy on the left is described as the 'ragtag and bob-tail junior', with Charlie F Dashper (22 years old) in the middle, and Alec Dudley, head of the department.

Charles Frederick Dashper later transferred to the publicity department of the former Fenchurch Street Headquarters.  He was still working from this office when he died some 23 years later, falling in front of a train at the Monument Station.