I thought I'd check the Devon county council web site and came across the following at: http://www.devon-cc.gov.uk/socserve/disc/mocm.html
There is a child minder named Christine Beverley Hedge whose address is Dashpers, The Drive, Holbeton, Devon.PL8 1LY. Holbeton is a village about 10 miles SE of Plymouth.

I went to Brixham today, and I spent an hour looking through old books and found an item which might be of interest :- a photocopy of an old Map of Brixham dated 1842 which shows Dashper House (lower center). It was at the top of Dashpers (the road) and the lady said she thought there was some sort of scandal when the house was demolished (when??) as 'they found an arm or a leg or something'. (see Dashper Xfiles #3) 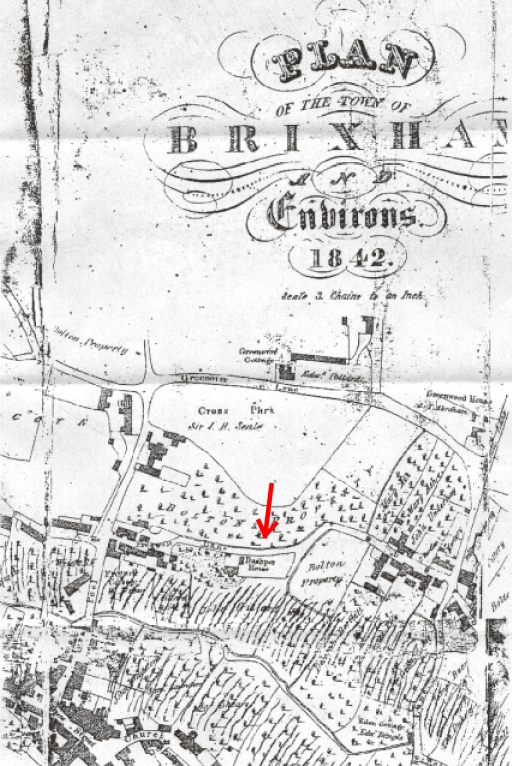 "That may be the mysterious village of Dashper I found about 10 years ago and then promptly lost.  Great X file. I use www.google.com when I need anything.  It is powerful and quick.  I typed in Holbeton and got an answer quick.  It is a rather non-commercial search engine, wonderful for genealogists.  I recommend it."

"HOLBETON, a large straggling village, on an eminence, west of the Erme estuary, and four miles S.W. by W. of Modbury, has in its parish 1120 souls, and 4623 acres of land, extending to Bigbury Bay, and including the hamlets of Mothecombe, Creacombe, and Ford, and many scattered farmhouses, &c. Lime is burnt here, and barges of 70 tons come up the estuary.

Lady Eliz. Bulteel, (daughter of Earl Grey, and a relict of the late J.C. Bulteel Esq.,) is lady of the manor, and has a large and elegant mansion here, called Flete House, which was long the seat of the ancient family of Hele, one of whom was created a baronet in 1627. This branch of the family became extinct in 1716, when the estate passed to the Bulteels. . . . Membland Hall, the seat of Robert Robertson, Esq., formerly belonged to the Rev. Sir Pp. Perring, Bart., and was the occasional residence of his family, one of whom, Sir John Perring, was Lord Mayor of London in 1803, and was created a baronet in 1808. His uncle purchased the estate of the Bulteels, and rebuilt the house. Rd. Holland, Esq., the Rev. W.J. Pinwill, and several smaller owners, have estates in the parish. The Church (All Saints,) is a large and handsome cruciform structure, with a tower, containing six bells, and crowned by a spire. It is mostly in the early perpendicular style, and in the south aisle is a canopied monument, with a recumbent effigy of one of the Heles, and several kneeling figures.

"Found this extract whilst doing a www.google.com search of Dashper. Maybe further information on the origin of the mysterious place called 'Dashpers' but this time in Murton."

Mentioned in the 1861 census of Murton were a few Irish and Welsh families but not one from Devon or Cornwall. The Cornish and Devonian tin and copper industry collapsed in the early 1860s in the face of overseas competition and many of the workers migrated to the northeast and other coalmining areas. By the time of the 1871 census there were some 25 families all living in the same part of Murton, a brand new block of 12 rows which had not existed ten years earlier. This was the origin of the name ‘Cornwall’ for that area, officially known as ‘Greenhill’. There is still a Cornwall Estate in Murton today, a council estate, but ‘Old Cornwall’ is long gone, demolished in the 1950s and 1960s.

The first of these migrants were merely the scouts, the vanguard, of far more who would appear in time for the censuses of 1881 and 1891. The same phenomenon can be observed in the rest of Easington District in the censuses of 1861-91 inclusive, especially at New Seaham and Wingate Grange collieries. A row was named Cornish Street at New Seaham, an entire district at Murton. The immigrants came from such places as Collumpton, Horrabridge, Egbuckland, Beerferris, Tavistock, Whitechurch, Walkhampton, Oakhampton, Mary Tavy and Inwardleigh in Devon and Calstock, Beeralstone, Callington, Liskeard, Stoke Climsland, St. Germans, Northill, St. Ives and St. Just in Cornwall. The following southwestern surnames appeared in Murton and Easington District for the first time in the 1860s and are still present today:

Went to Brixham today and consulted "the man who knows it all" - Tony Morton - Treasurer of the Historic Brixham Society.   Dashpers House was renamed in the 1920's to Summerlea House, by 1949 it had been split into a number of Flatlets. It was demolished in 1964/1965, since which a Housing Estate, the Eden Estate, has been developed on the property and grounds thereof. About 50 houses have been built, which indicates how much ground was attached to Dashpers.

I think I have solved the gruesome mystery, as Tony produced two newspaper cuttings. This mystery was also the subject of a BBC1 TV program on the 7th October, 1994.  I contacted the BBC but there was no video made of the programme, although I might be able to view it if I went to Reading or London.   I also contacted a Mr Ivan Parsons this evening, he is a Historical Photographer specialising in Brixham, but he does not have a photo of Dashpers House.

I asked a solictor contact about old property deeds who says some solicitors simply burned them as there was no legal requirement to keep them after a certain period of time so theres not much hope Dashpers' deeds survived.

So now I've sent off a request form to the Research Service at the Devon Record Office asking them to search for info on the earlier history of Dashpers House.  I already looked online for late 1600s records of window tax and hearth tax but did not find any, nor any Brixham wills for Dashpers so hope the experts can unearth something from other records and original documents.

I'm still waiting to hear from the Devon Record Office about Dashpers House but in the meantime I contacted Tony Morton.  In 2002 he wrote an article about Brixham in 1952 and mentioned Dashpers. I found it on the internet in 2003 when searching for Dashpers at the same time I found the Dashper website.  I should have thought of contacting him before. He used to work at Brixham Museum .   He turns out to be a mine of information and I'm forwarding his reply.  I recognise a lot of info is already on the Dashper website but the census info and maps are all new to me.

"I am passing a copy of this e-mail to Angela Jones of Brixham Museum, so that she can keep a copy along with the other correspondence about the Dashpers family/house. I think I've included everything I know.   Dashpers House is asserted by some to have been built by the family in the early 17th century but there is no mention of Dashpers in a conveyance of neighbouring land in 1784, and the land appears only as orchards on the draft Ordnance Survey of 1803/4.  At the time of the tithe map in 1838, the owner occupier was John Gillard, whose family also owned the old town manor house, known as Black House, on Milton Street. They are not linked to the house in any other known record. (I'm attaching small sections of the maps, including this one, with the Dashpers House and garden/orchard outlined in colour.) The first known document to name the house is the map of 1842 you mention, and no deeds are known to have to have survived. There were several notable, large houses in Brixham, and Victorian descriptions of the town fail to mention it at all.   The 1851 census is silent; only lower class inhabitants are listed in the unnumbered house on the street, so Dashpers is assumed to be the property listed as by a tick under "empty or new houses".  John Spencer Compton RN is listed as living at Dashpers in 1873, and at number 9 Frogwell Lane in the 1881 census, which was very probably the same house, as the road was previously known as Frogwell Lane, and Compton is the highest class of person there in this census. He was aged 50, and described as a retired Royal Navy lieutenant, having been born in Paignton, his wife Rosina, aged 35, and children Rose, 8, and Langley, 7, were all Brixham-born. In 1890 Dashpers was the address of George Elson, a master mariner, whose home before and after was on Bolton Street. In 1891 Dashper House is listed in the census as the home of Mary Crabbe, age 49, born in Greenwich and living on her own means. She was not very wealthy as her two daughters were both working as governesses, and there was a co-habiting sister-in-law and two 'visitors', one of whom was also living on her own means. There was only one servant living in.   The house was known as Summer Lea during the mid 20th century.  In 1949 the electoral register for Summer Lea lists: Wood, Annie; Howell, Edith; Bradford, James & Doris; Stebbing, Kathleen & Hinde, Margaret. The house was demolished after a catastrophic fire, reported by locals to have been in the late 1960s. Several attempts to locate newspaper reports of the fire have failed.   There are no known photographs or paintings of the house, though it may well appear in private family photos. Locals refer to the house as being Victorian in style, and it may well have been rebuilt during the local economic boom of the 1880s.  A high wall kept inquisitive eyes at bay; part of the garden wall, behind which used to stand a large greenhouse, is still standing in Dashpers, just east of Eden Park, part of which close of houses was built on the site of the garden. The Modern houses south of Dashpers and west of Eden Park are on the site of the house itself. I'm also attaching two map sections, from 1933 and the OS from 1951.   "Dashpers" as a place name is thought by local historian Derrick Johnson to have originated from an Old English phrase meaning "Dale of Ash branches". Dashpers was located in a valley and ash is common in the wider area, but another local historian, Ralph Gardner, asserted that the place-name was taken from the surname, which he believed began as Dampierre, a Hugenot name given to protestants in France. The "Dictionary of British Surnames" by PH Reaney agrees a French origin, suggesting it is derived from 'Duzepers' or similar, first recorded in 1203, probably from an Old French origin meaning Twelve Peers, refering to favoured knights of Charlemagne, and later extended to any French nobility.   If Gardner was right, the Victorian house was recording the name of a family of an earlier century, probably previous land-owners of the site.  The parish registers contain entries for the Dashper family from 1608 onwards. These are available online through the IGI at  www.familysearch.org   There are Dashpers in the the parish protestation vow of 1641, in the churchwardens' accounts in 1633, in 1688 and in 1725, in the overseers of the poor account book for 1707. Exactly where the family lived is not clear from the surviving records. It is possible that they had a house on the same site as the later Dashpers, but there is no evidence for this."  (Tony Moreton in correspondance with Rosemary Morley) 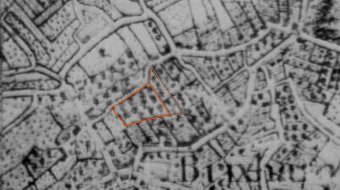 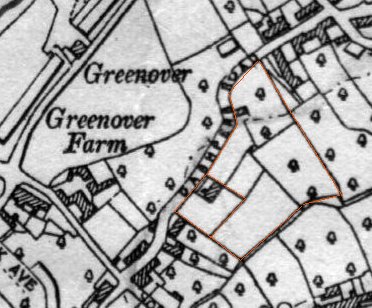 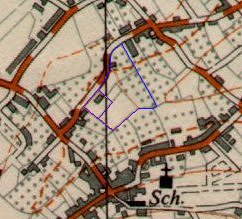 I'll try the Devon Record Office for copies of the documents Tony lists of  Dashpers in the the parish protestation vow of 1641, etc. I don't suppose there's very much more I can find out about Dashper House / Summer Lea.

I 'm busy at the moment hoping to trace any former occupants of the house (or their descendants) from the electoral rolls, who might have a picture or description of the house. I'm also waiting to find out if there were any aerial photos taken before the house burnt down. The Ordnance Survey didn't have any but suggested I tried English Heritage who I contacted this week and are now looking.