Genealogical Fieldtrip to the UK (March/April 2000)

We scoured the Parish records and could not find any other entries for the Dashpers.   We looked at all the surrounding parishes and could not find them.  We really wanted to find William and Agnes' marriage but it was not in Tavistock.   The only clue we could come up with is the Hawkin Shop Gate which is another interesting story.  Gloria found the picture of this location in a book and photocopied it.  Then we decided to find it.  The building is located about a mile north of Tavistock at the bottom of a steep hill.  We almost gave up looking for it.  Now it is a small stucco cottage with a small room added to the north side of it and a solarium added to the south side.   This building was the address given by William and Agnes at the times of the childrens' births.  We took pictures of the building and then decided to knock at the door. 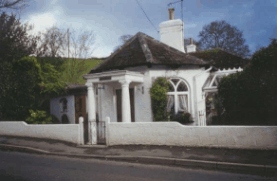 [ Hawkin Shop Gate toll keeper house outside of Tavistock where William and Agnes Dashper had many of their children from 1815 onward, as seen April , 2000]

An elderly couple answered but knew very little about the history of the building other than the following: The Duke of Bedford owned the roads leading to Tavistock and charged a toll for their use.  Hawkin Shop Gate was the north entrance gate to Tavistock.  The wagons were charged by the width of the wheels-the wider the width the less the toll (the narrow wheels tore up the road more).  At that time lumber was cut in the moors and transferred to Tavistock where it was made into charcoal.  The wagoneers got smart and brought the wood to the gate then transferred the wood to another wagon on the other side of the gate so did not have to pay.   William gave his occupation as wheelwright and apparently there was a lumber mill behind Hawkin Shop Gate where he may have worked as well.  The woman said this location was called Taviton.  I think we may have to see if there were parish records for Taviton as a possible birth place for William and marriage of William and Agnes since we have not found them anywhere nearby-Mary Tavy, Peter Tavy, Lamerton, Lifton etc. 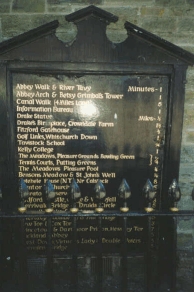 [All that remains of the ancient abbey which is just across from the Tavistock Parish Church.  It locates points of interest within walking distance of the old abbey gate.]

There was a baptismal index of all in Tavistock which I imagine has been overlooked - it gave all the Dashpers and a reference # so they were easy to confirm.

(These records add ***** five more children to that which were previously known, and now links up to three significant sides of our Dashper family)

Here are the children of William and Agnes Dashper:

We were very disappointed in the records office in Exeter - we found nothing there for our Dashper family.  The small library in Tavistock has much more information on microfiche.

We also found one marriage of significance.

Richard Minhinnick a mason and Sarah Dashper both of Tavistock.

The mark of Richard Minhinnick and a beautiful signature for Sarah Dashper.

This couple is on the 1881 census  at 354 Brook St. Tavistock with children John, Janie, Bessie and Julia A.

Gravestones:
William, Agnes and the first John Henry Dashper were buried at the parish churchyard at Bedford Square in Tavistock.  Part of the graveyard has been moved to two other locations nearby to make way for St. Eustachius Church which was built after William, Agnes and John Henry were buried.  There is no record of stones for them and we are not even sure if their graves still exist in the churchyard.  There are some "token"stones remaining, some are leaning on the walls of the Post Office and another cemetary was started nearby. 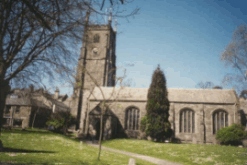 [Tavistock Parish Church has been on the site since 10th century, but has undergone many changes.  The church yard  is believed to  be the site of William and Agnes Dashper grave.  It is believed to be unmarked.  Notice a few tombstones remain, some in their original location and others resting against the church walls.  Extensive renovation to the church and changes to the roads in the area disrupted the old cemetery.]

The other Dashper burials we found were at  Tavistock Cemetary: 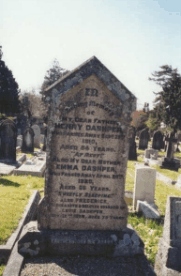 [Henry and Emma Dashper gravestone:  Tavistock Cemetery, note Frederick's son and just to the right the military tombstone of Frederick.]

In loving memory of Henry Dashper

Also Frederick son of the above and beloved husband of

To the dear memory of Henry,

the beloved husband of Emma Dashper

For thirty years caretaker of this cemetary.

Also to the dear memory of Emma,

the beloved wife of HenryDashper


William and Eliza Dashper and Son Frederick and his wife Grace:

In loving memory of Eliza

the beloved wife of William Dashper

Also William dealy beloved husband of the above

He giveth his beloved sleep.

Also Frederick son of the above

In front of this stone on a separate stone is:

wife of the above

Frederick and Ann Dashper
Right side:

In memory of Frederick


Tavistock Cemetary is well kept and has at least 10,000 burials.  A caretaker is on site and all records are kept there.  It is located on the south side of Tavistock as you enter from Plymouth.  Henry Dashper and his son Henry both were caretakers at this cemetary and the small cemetary at the centre of Tavistock.  I believe the small "shack" where the oldest Henry lived, is still on the cemetary site in Tavistock.  On the 1891 census he gives his residence as Cemetary Lodge.

Johannah Dashper
Located at Mary Tavy Parish Cemetary 3rd row from street left of the walkway to the church. 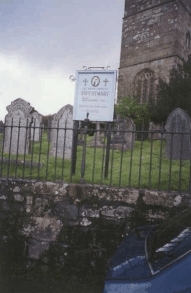 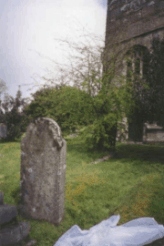 [Johannah Dashper's tombstone  to the right of the 2 tombstone crosses behind the graveyard sign at Mary Tavy, St. Mary Churchyard.  It is back 3 rows from the fence and the right cross is partly obscuring Johannah's stone.  Picture was taken from the road.  Discovered the last day in Tavistock before returning to Canada, April, 2000. A very lucky find since the writing was obscured when wet. ]

Sacred to the Memory

It was only by luck we found this gravestone.  It had been raining off and on all day.  The stone was dry and readable when we found it.  Several minutes later it began to rain again and within seconds the stone became wet and the inscription was gone - illegible.

Back to Latest News